A brief History of the OUSCR

The Oxford University Society of Change Ringers (the OUS) was founded by J.E.Troyte on 2nd February 1872, and so is the oldest university society dedicated to change ringing. In these early years the majority of members were training as clergy or from clerical families. The first peal for the Society was rung on the 10th anniversary of the foundation and was Stedman Triples. In 1887 the Society lapsed, with three brief revivals in 1890, 1892 and 1902, until it was revived in 1920 by Harry Miles, since when it has been in continuous existence.

For at least 20 years before the second world war, the standard of ringing never rose much above Bob Minor and Grandsire Doubles. The ban on tower bells during the war could have caused the Society to die out once more, but instead emphasis was placed on learning to ring handbells well. The success of this was such that when the ban was lifted there were enough competent ringers to be able to ring much more than had previously been possible, and surprise major began to be rung regularly. Since then the standard of ringing has mostly been quite high, with the number of peals peaking around 1975. Our peal database includes all OUS peals and is an interesting source of information.

For sometime the OUS had no fixed abode, ringing at a number of towers, including All Saints (now Lincoln College), St Ebbes and St Giles. By 1939 the church of St Mary Magdalen (then a 6-bell tower) had become the Society's base, although other towers were still borrowed for 8-bell practices on a regular basis. In its early history the Society was dependent on the help of the local bands in offering their towers for practices. This co-operation has continued to the present day, with the links between the OUS and the Oxford Society being strengthened further with the bell improvement projects and augmentations at St Thomas and St Mary Magdalen from the 1970's.

Like any university society there has always been a social side to the OUS. From the 1960's onwards this came to be more associated with pubs and since then there have always been members of the Society who appreciate real ale and single-handedly try to keep the brewers in business!

Today the OUS continues its enjoyable traditions of ringing and socialising. Ringing is mainly at St Mary Magdalen and St Thomas, and we also provide Sunday service ringing at other city towers.

The information for the short history above is taken largely from John Spice's "The Oxford University Society of Change Ringers 1872-1997", a very detailed book, which includes many personal recollections and anecdotes from OUS life members. It is a must-read and can be ordered from Simon Bond, gensec@ouscr.org.uk for £30, including p&p. Discount available for collecting in person in Oxford. 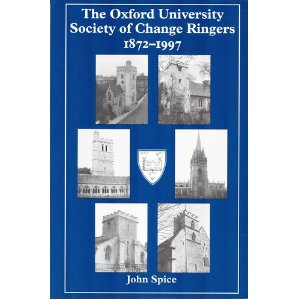